You have to descend, down into the basement, to find the dancers who come from all over the world to perform at L'Espace Culturel Bertin Poirée in the center of Paris. It is a small and very intimate space, with its old stone walls and archways, and the curved ceiling not so high above. It is in this charming space the Tenri Franco-Japanese Cultural Association produces an ongoing dance series. It is also a space in which you can see every detail of the performer at work. 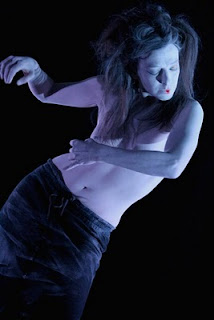 The intimacy of the space served Kan Katsura's Butoh program 'Oracle & Enigma' well, because each of his dancers is very distinctly their own person and personality, and we had the chance to see this and study it in his work there. I found myself grouping the dancers into three categories: 'expressive,' 'pure movers,' and 'the undeniably present.'

The 'expressive' dancers tended to be actively and consciously performing, committed to conveying both the visceral and emotional experience of the work. The 'pure movers' embodied the movement rather than any overt intent, and allowed their dance, itself, to create our experience as viewers. I would say that the first group were filled with passion, that might remind us of our own. The second group expressed simple and exquisite beauty in their being and their dance. 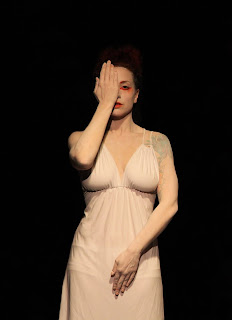 As lovely as these performers were, it was actually the third group, comprised of Sharoni Stern Siegel and Margherita Tisato, that touched me most deeply. These two women were so fully present in themselves in the work that I found my world suspended as I journeyed with them into theirs. Their commitment to the moment managed to brush aside the questioning my mind is prone to (of meaning, content, form, construction, value...), and brought me back to the simple and undeniable reality of existence, where judgement has no role.

The cast was completed by Kan Katsura, Victoria Macarte, Vangeline and Vangeline Theater dancers Pamela Herron, Maki Shinagawa, Azumi Me and Stacy Lynn Smith. Music and sound effects were by Noriko Tomatani and Francois Tariq. The small array of lights managed to create a multitude of effects and moods, thanks to Margot Olliveaux, the center's inhouse lighting designer.