© Ann Moradian for The Dance Enthusiast, with photos by Frédéric Kiehn

"The beauty of art lies not only in our opinion of it, but in the degree that it reminds us of our humanity... Art re-calls us to our lives." 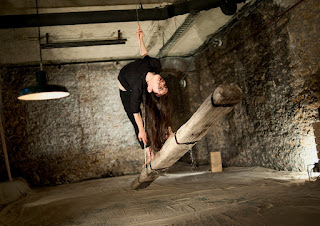 There are 15 of us. There is not space for more. We enter through the back door of the Paris-Villette Theatre squeezing down a narrow stairway into the depths of the building's old cellar to witness Satchie Noro's performance, Les Absents. None of us have removed our coats: it is almost as cold inside as outside. Lights roll gently over the ragged wall surfaces and in between the stone archways of what seems like an endless labyrinth.

Noro appears - half in darkness, half in light- casting shadows in the distance. She seems like a giant insect with feet en pointe and arms inserted into the sleeves of, what look like, beautiful bamboo crutches. Her body is encased in a dress of wooden squares that are linked together loosely. They flap and clack as she moves. When we follow her deeper, through the building's small chambers and arches, we are finally allowed to sit down: our coats are still firmly clutched around us. 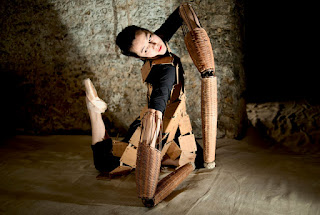 A space has been created out of pipes, hanging lights and wooden planks - like a rat's idea of playground. But Noro isn't a rat. My friend thinks Noro is going through a metamorphosis from insect to chrysalis as the performer spins on a hanging lamp and steps out of her percussive shift Noro continues her performance in simple black dance clothes, minus the pointe shoes.

I zone in and out as the piece progresses. The rich textures of such a rugged space, and Noro’s smooth ability as an acrobat intrigue me. I wonder how, or why, she is willing to do four performances in a row in a space this cold, and on a floor that is - despite the huge swath of muslin covering it - hard, broken, uneven concrete. The idea of her squeezing in between the top of her metal playground and the ceiling, swimming in that little space with just enough room to get through, was fascinating. I couldn't help but wonder how many times she scraped her skin on the rough ceiling in rehearsal. (Just one of the thoughts that passed through my wandering mind.) 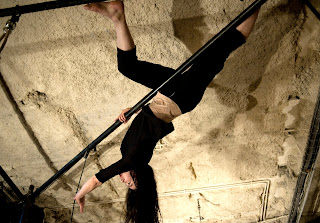 After the insect part at the beginning, I don't really feel any connection -- it is as if an important part of Noro has been left behind with her armor. She isn't sincerely with us anymore. By the end, she renders a smiling, jumping, little girl who spins freely through the encumbered space. But her smile is truly not that of a joyous girl; indeed, it belies the depth one senses buried in this beautiful Franco-Japanese woman. And the danger is real.

The performance lasted 30 minutes so afterwards my friend and I headed off in search of a warm drink. Making the time to chat in a café is truly one of the most pleasurable aspects of life in Paris. What is surprising, perhaps, is that we talked for almost two hours about the performance, finding references in the evening to our own nightmares and dark, unconscious depths.

When all is said and done, the beauty of art lies not only in our opinion of it, but in the degree that it reminds us of our humanity and our range of possibility. Art re-calls us to our lives. For me, Les Absents was an evening well spent.