Something new and exciting happened at the International Dance Day's 30th Anniversary celebration at UNESCO's headquarters in Paris. This year the artist asked to write the annual 'Dance Day Message,' Sidi Larbi Cherkaoui, was also invited to program the evening.  He put together a coherent and satisfying evening of excerpts from his choreography and films.

Cherkaoui's Matter, from Origine, could be interpreted as the very grim tale of first woman from Babylonian mythology, but his ingenuity and playfulness keeps the work humorous and intriguing. Kazutomi Kozuki enters like a monkey man to watch the bejeweled Daisy Phillips perform an unwavering adagio of one-legged contortions. He approaches on his belly, with arms that keep folding out from under him at impossible angles, as she removes her glittering ornaments one by one. He reaches out to touch them, but that is clearly not allowed. Instead, he serves as her doormat, her shower, her towel, her robe, her bed... My curiosity is peaked, and I am left with a million questions that only seeing the entire work will answer. 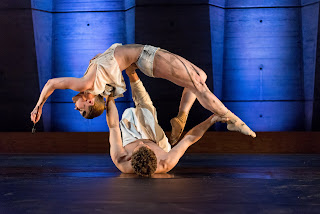 In Pure, an excerpt from Cherkaoui's TeZukA, Vebjorn Sundby tries to erase the paint Guro Nagelhus Schia keeps painting all over her own body, and his. He gently but insistently erases every swipe of black ink possible from their white costumes and bodies. All of Cherkaoui's dancers are beautiful, but a moment of pure magic happened here: Vebjorn and the dance were one. The dance became the life and breath of the dancer, and the only moment was 'now.' Gorgeous! TeZukA will be performed in its entirety at La Grande Halle of La Villette here in Paris next month, and I very much hope to see it. 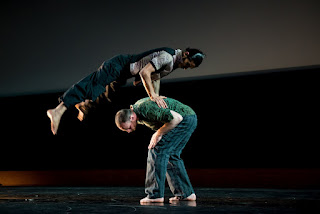 The evening was limited in its focus, to be sure. It was a celebration of one artist's work, and one aesthetic within the presentational domain of dance. It is important to remember and acknowledge this. At these celebratory types of events we love to put dance momentarily on a pedestal and speak of it as 'a universal language.' But it isn't. Dance is marinated in a sea of cultural references. The smell and flavor are so familiar to those that swim within it that our references and assumptions can remain unconscious and invisible until we are confronted with an outside perspective that either misconstrues our meaning or challenges it. 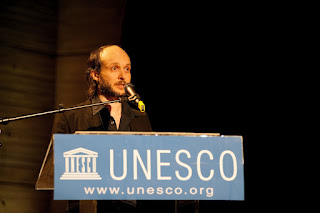 The event is organized each year by the International Theatre Institute (ITI) at UNESCO. What is abundantly clear is that ITI's director, Tobias Biancone, his staff and its Dance Committee give dance an honored place within the context of theatre. Biancone said that we must "fight for dance" and for its place, and that this celebration was a way of doing just that. The 1000-seat space was packed again, as it was last year.

Cherkaoui points out that "the underlying beauty in a performance is that it is primarily the convergence of a mass of people, seated one next to the other, all sharing the same moment." In this sense, dance is indeed, as Cherkaoui states "a celebration of co-existence, a way to give and make space and time for each other." 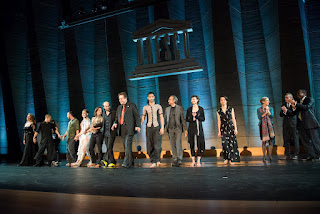