THE BIRTH OF A DANCE
© Ann Moradian for The Dance Enthusiast

Premieres are tricky... but being lulled to sleep during a dance performance is never a good sign. I assume that some of the weaknesses in Russell Maliphant's The Rodin Project will be worked out by the time it arrives in New York.

Alexander Zekke's music for this production is beautiful in and of itself. I keep hearing that sweet, low voice of the opening cello. It enters and merges with my blood. I mean, it's that beautiful! The movement, however, happens in a world apart from the music. Clear and often abrupt shifts in the score seem uncalled for and unrelated to the dance. This disconnect appears without purpose and, in spite of its beauty, I don't find the the lulling quality of the music helpful. 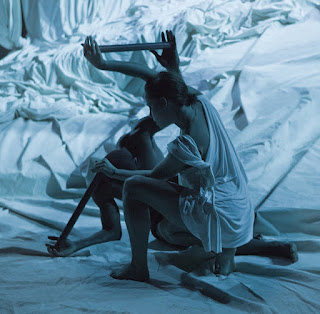 The first half of the The Rodin Project is all white on white, with costumes (that remind me too much of diapers) in the same off-white tone as the the fabric that is hung and piled on stage, alluding to marble columns and marble quarries. The second half of the dance is black on black, referring, I assume, to the bronze that Auguste Rodin also sculpted with. Russell Maliphant's palette choice is understandable, but it carries with it a serious challenge to the dance's visibility.

The lighting by Maliphant's long-time collaborator, Michael Hulls, aims for atmosphere and feeling, but I can't see the dance or the dancers. There is an interesting moment where the partial lighting from behind almost works--the deep red tones hinting at the kind of heat that softens bronze-- but overall, the dancers are hidden from us in a way that doesn't serve.

And we want to see this dance, and these dancers! They are strong and beautiful, even if underutilized. Three women: Ella Mesma, Carys Staton and Jennifer White, seem decorative rather than integral to the piece. The male-female partnering feels almost formulaic. It is the men alone who have the interesting choreography in this work.

A capoeira-like duet between Tommy Franzen and Thomasin Gülgeç holds some lovely moments. The men move together with a smooth power and fluid control I have seldom seen.

And the duet in the second half, with Tommy Franzen and Dickson Mbi, is unforgettable. Franzen and Mbi move up and down and upside-down the face of a black wall, defying gravity as gently as if they were in free fall. We know that great effort must be required to hang by one hand and slide smoothly down the side of a wall, but we don't see it and we don't feel it. Instead we feel the tenderness of cat feet and kindness as the men help each other explore this vertical surface. It is impossible to ignore the reference to Rodin's masterpiece, The Gates of Hell, because of the sculptural play along the vertical plane. But it remains a reference to an inspiration, rather than an interpretation or reproduction of another artist's work. 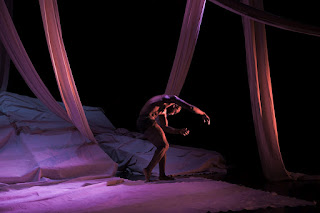 The pinnacle of the evening (literally) was a solo performed by Dickson Mbi, high up on a black platform. This section is really black on black, with Mbi's dark skin sculpted beautifully by the light (finally!), just enough to see amidst the black void that surrounds him. Mbi's performance is brilliant and everything comes together here, visually, viscerally, emotionally and intellectually. Mbi pops from one precise form to another, creating a kinetic 'strobe light affect' . Interspersed between pure abstract movement are moments of passionate expression, measured carefully, but escaping nonetheless, like built up steam. This must be the "popping" (as opposed to hip-hopping) aspect of Maliphant's exploration in this work.

With the sound of metal hammering against metal, I experience the birth of this sculpture, with its own particular structure, yearnings and necessities. I am particularly struck by the contradiction between the impersonal quality of metal and the very personal expression Rodin imbued his most potent works with.

It would be satisfying to say that The Rodin Project explored this concept (or another one even) successfully throughout, but it doesn't. Not yet, anyway. There are some beautiful moments, to be sure, but too often the dancers lacked that focus and commitment that can help us enter into an otherwise inaccessible world. Apart from the more vivid sections, the overall work, at this stage, is oomph-less. The use of a strobe light seemed like a cheap way to try to wake us up at the end. Still, I am curious to see this piece a year from now.