Exhibit of Dance and the Visual Arts
at the Centre Pompidou, Paris
November 2012 –April 2, 2012

©Ann Moradian for The Dance Enthusiast

Less than 20 steps into the Danser sa vie (Dance Your Life) Exhibit at the Centre Pompidou, it is clear that seeing dance demands an enormous shift out of our habitual rhythms. You really have to slow down. If the exhibit had only been made up of paintings, photos and text, I am sure I wouldn't have noticed or thought much about it. 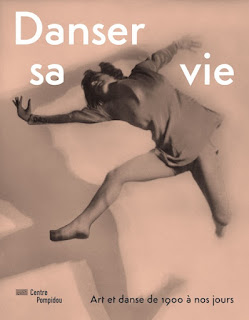 
Fortunately, the Centre Pompidou has an extraordinary collection of dance films and a number of these were central to this exhibit. Many were projected onto huge screens that brought the recordings to life. Live performances were lightly peppered in as well. The balance between all of the different mediums was well measured -- at least through the first half of the exhibit -- and invited a sense of total immersion into an era or an idea.

The exhibit reveals, before our very eyes, the relationship between dance and the visual arts, and the "hidden side of the avant-gardes" where dance, we learn, played an important and pivotal role. The works are displayed not only in relation to each other, but also in relation to the flow of history and a culture in constant transition.

Seeing Isadora Duncan's free-flowing body projected alongside the work of artists she inspired, like Auguste Rodin and Antoine Bourdelle, sheds a tangible light on the influence she had on their work. Similarly, Vaslav Nijinski's Afternoon of a Faun performed by the Paris Opera Ballet and projected in grand format, is displayed alongside artists he inspired and collaborated with, like Léon Bakst, the Russian painter who designed the costumes and sets for this virile and controversial work.

The films of Mary Wigman's Hexentanz (Witch Dance) and Totenmal (Call of the Dead) are potent, and made even more so when placed in relation to World War II and the Third Reich, which she had cooperated with. The precursor to the iconic, masked, robotic monster, Darth Vadar (from George Lucas’ film Star Wars) appears not only in Wigman's Totenmal but also in The Green Table by choreographer, Kurt Joos, who fled Germany in 1933.

Rudolf von Laban, a Hungarian known in the United States mostly for developing Laban Movement Analysis and Laban Dance Notation, is revealed to be not only an extraordinary performer, but also the creator of what might be described as an arts commune (which looked to me like it was mostly made up himself and a troop of adoring female dancers.) I was as surprised by this as I was to learn that Laban also cooperated with the Third Reich, working with the Ministry of Propaganda.

Descriptive texts weave a path throughout the exhibit. Sometimes they bring a new understanding to the relationships at play on an historic level. Sometimes the words offer insight into the personal explorations and motivations of the artists. I had never heard of Sonia Delaunay before, but I loved reading her writing about how the rhythms of the foxtrot and tango made them want to explore the dance of color on canvas--and she did in her abstract work La Bal Bullier. 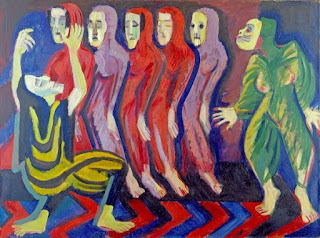 A film by Theirry de Mey, Counter Phrases, featuring the choreography of the contemporary Belgian Anne Theresa de Keersmaeker, is the centerpiece in yet another room. This film follows the Duncan and Nijinski presentations and, unexpectedly, creates an almost tangible thread spooling out from those earlier works. Normally I would associate de Keersmaeker's work with the more minimalist choreography of someone like Lucinda Childs, but here less obvious links to the beginnings of the early modern dance movement are made visible.

The exhibit is divided into three parts that are not as clearly defined as they could be. The first is focused on personal expression and the second on abstraction and mechanization. The third section is labeled "performance" and covers theatrical performance, the body as a performance event, dance 'happenings', popular dance and performance art.

By the time I reached the last section, I admit that fatigue had set in. I found myself more often repelled from the work rather than drawn into it. I began skimming over the surface of things. I couldn't see the relationships clearly, and I did not always agree with the work chosen. I was intrigued by the physicality in the creation of visual works by Kazuo Shiraga and Jackson Pollock. Man Ray's intelligence in his poignant broken clock piece Danger/Dancer resonated deep within the dancer in me, and my awareness of the inseparable link between movement and life itself.

A film of Anna Halprin's Paper Dance, with nude dancers moving quite naturally with and in a huge pile of paper, satisfied me enormously with its visual beauty and simplicity. I was delighted by the challenge presented in Olafur Eliasson's 2011 film, Movement Microscope, showing the dance that resides in the most ordinary of movements and gestures. 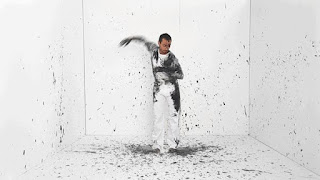 In one of the last rooms, small photos and sketches were hung on the large walls. After the larger than life presentations in the preceding halls, those pictures seemed like scratch marks on a vast canvas. The rows of little black boxes lined up on viewing tables in the center of the room did little to invite me in to the films of work by contemporary dance artists like Lucinda Childs, Deborah Hay, Steve Paxton, Yvonne Rainer, and Robert Rauschenberg. I did little more than glance at the last room with a film of choreographer Jerome Bel's work. It just couldn't capture my attention at this point.

You really have to slow down to take dance in. It is almost like you have to live along with the dance to really experience it. This can be a little irritating when you are tired or rushed. In an exhibit such as this, it becomes clear that if you only glance at it, you will see next-to-nothing. If you stop for 3 minutes when a dance is ten minutes long, you will get a taste of its texture and colors, rhythms and form, and possibly a feel for the artist's aesthetic and choices, but you won’t see the work, nor will you see the artist's composition or vision. It is like looking at a small corner of a painting, rather than the entire piece.

I learned an enormous amount from this exhibit and appreciated the intelligence and love of dance, art and life at work here. After spending four hours there, I could only take in the first half. I guess I'll be going back!  Thankfully Danser sa vie runs through April 2nd.
Newer Post Older Post Home