When we hear the word yoga, what comes to mind for some of us (particularly those of us in the West) might be a type of exercise that involves contortionistic postures geared toward improving health, well being, flexibility and strength. To limit our understanding of yoga to these postures, or asanas, is not only a gross misconception but also a great oversimplification of what Georg Feuerstein in The Yoga Tradition describes as an "enormous body of spiritual values, attitudes, precepts, and techniques that have been developed in India over at least five millennia and that may be regarded as the very foundation of the ancient Indian civilization."(1) Even if we add to our understanding of this equation the somewhat lesser known practice of pranayama, the regulation of vital energy through the breath, we have still only skimmed the surface, despite having multiplied our depth a hundred-fold. 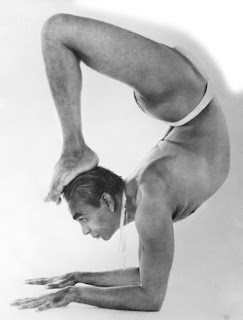 There are many views and many schools of yoga, and not all of them are in agreement as to how one practices yoga and what its goals are. In spite of this, there is an agreement that spiritual transformation and transcending the egoistic sense of self (ahamkara) is necessary. According the Feuerstein, the differences have more to do with how this is done, and how this 'transcendence' is understood or defined.(2)

The word yoga is usually translated as "union." Most sources link it to the Sanskrit root word yuj,(3) which means "to yoke, harness, or unite."(4) BKS Iyengar, one of the foremost teachers of Hatha Yoga,(5) says that yoga is "the union of the individual soul with the Universal Spirit." To make this abstract idea more accessible he proposes the simpler and somewhat more concrete idea that yoga is the union of the body with the mind, and the mind with the soul."(6)

Patanjali, in his classic text The Yogasutras, defines yoga as the restraint of the fluctuations of the mind. In the Yoga Bashya, the oldest available commentary on The Yogasutras, Vyasa defines yoga as samadhi, or 'ecstasy.'(7) In the much earlier Bhagavad Gita, yoga is focused on those who must act within the world.(8) Krishna tells the distraught warrior Arjuna that the yogi's "consciousness is unified with Brahman" (that which is Absolute and non-changing(9)). He is able to act in the world in accordance with dharma (cosmic law or virtue) without attachment to the results of his actions.(10) Feuerstein says that "In its oldest known form, Yoga appears to have been the practice of disciplined introspection, or meditative focusing, in conjunction with sacrificial rituals."(11) 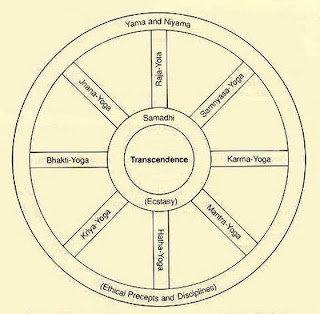 Wheel of Yoga, image from 'The Yoga Tradition' by Georg Feuerstein

To give an idea of the differing yoga systems, Feuerstein uses the image of an eight-spoked wheel, which I find helpful in understanding not only the different approaches, but also the commonalities within the tradition. The outer rim of the wheel, shared by and uniting the outer edge of each of its eight spokes, symbolizes the yamas and niyamas. These are the moral and ethical principals which are an essential part of any yogic practice. The inner hub of the wheel, where all the spokes converge and re-unite, represents samadhi. Samadhi literally means "placing or putting together" and can be translated as "enstasy," or more often as "ecstasy."(12) The empty space within the inner hub represents transcendence.(13) The eight different systems represented by Feuerstein's spokes are:

In addition to the systems of yoga found within Feuerstein's wheel, there are numerous others, both ancient and more recent, which are also called Yoga. These include not only traditions that have been influenced and inspired from the yoga of India, like Vajrayana Buddhism (Tibetan Yoga), Zen (Japanese Yoga) and Ch'an (Chinese Yoga), but also Laya Yoga(16), Tantra Yoga (from which Hatha Yoga comes(17)) and Integral (purna) Yoga, for example. These additional yogic approaches are sometimes classified within the confines of the systems represented by Feuerstein's eight spoked wheel, and sometimes not.

Integral Yoga,(18) is a more recent evolution and is a good example of how the tradition of yoga has evolved through the ages. Introduced by Shri Aurobindo during his lifetime (1872-1950), it both honors its ancient roots, traditions, values and practices, while simultaneously acknowledging and addressing the vast differences of a modern, westernized world. In this system, Aurobindo responds to what he saw as a characteristic rejection of the material world. This "recoil from matter," he believed, began about 2500 years ago with the introduction of Buddhism and the concept of a "great chain of Karma," which extended the much older Vedantic concept of maya -- the idea that the manifest, material world is an illusion, unreal and inferior. Feuerstein describes Aurobindo's Integral Yoga as "an evolution-based ethics of world affirmation" with "the explicit purpose of bringing the 'divine consciousness' down into the human body-mind and into human life."(19) At any rate, I think it becomes clear not only how vast and varied Yoga is, but also that it has continued to transform and evolve over time.

Most of us are likely to meet yoga in the form of a 'yoga class,' which introduces us to Yoga through its physical expression of postures and breathing techniques. These belong to the realm of Hatha Yoga,(20) which is practiced within many of the yoga systems (Raja, Laya and Tantra Yogas, for example). This physical practice is characterized by not only asanas and pranayama, but also most often include meditation and mantra (chanting). There is also a strong chance that this first class will be a form of Hatha Yoga that is rooted in Patanjali's Classical, or Raja Yoga, as expressed and defined in his Yogasutras. Around 200 CE (about the same time Buddhism and Jainism were spreading), Patanjali gathered together and systematized many of the yogic practices that had been taught and handed down from teacher to student experientially for well over a thousand years. It is not certain whether "Patanjali" is in fact a singular person or a group of people. What is sure is that The Yogasutras, sometimes referred to as Yoga's "bible," is a major reference and resource for yoga today.

The Yogasutras is comprised of 196 sutras, or "threads." These are cryptic phrases indicate and give language to the guideposts and landmarks of the sadhaka's (practitioner's) journey into his own consciousness, beyond the ego-based sense of "self" into a greater transcendental "Self," and beyond even that to a thoroughly transcendental state. The Yogasutras map out the terrain of consciousness as per Patanjali's version of this practical philosophy. This is not the only map available. It is also worth noting that "the map is not the terrain."

Yoga is a philosophy that is not only practiced, but lived with each breath, each thought, each action and word. As much as it is not just a physical practice, it is also not simply a theoretical or intellectual philosophy. It is often expressed through religious language and is rich in its esoteric layers, but I believe it would be better today to say that it is a "practical philosophy" more than a "religion," and more "a way of life" than a practical philosophy. One might go so far as to call it a 'living philosophy' not only because it is studied and understood through the process of living it, but also because it is itself still growing and evolving.

Patanjali's system of Classical or Raja Yoga has eight 'limbs,' and the practice of asana is one of these eight. It is an interesting fact that only three of the 196 sutras in Patanjali's work speak of asana, or postures, in any way. Patanjali's Ashtanga (Eight-Limbed) Yoga(21) "outlines the path to enlightenment through purification, control and transcendence of the mind."(22) Its eight limbs, each focused toward that aim, are:

3) Asanas: physical postures
4) Pranayama: regulation of life force energy through breath
5) Pratyhara: education and control of the senses
6) Dharana: concentration
7) Dhayana: meditation
8) Samadhi: absorption, 'enstasy,' Oneness with all that is

Whatever route we take toward the heart of Yoga, if one's practice does not respect the yamas and niyamas, the ethical foundations of yoga, we have not even begun a yogic practice. If that practice does not honor the spiritual, transformative and transcendental goals of yoga, it has veered off in another direction and whatever interesting and useful terrain it may cover, it cannot be called Yoga.

1-The Yoga Tradition, p. 7
2-The Yoga Tradition, p. 36
3-According to Feuerstein, Vacaspati Mishra contests this interpretation in his 9th century sub-commentary on Patanjail's Yogasutras, saying that the root should be yuja (as in "concentration"), rather than yuji (as in "conjuction"). (The Yoga Tradition, p. 8)
4-Dancing With Siva, p. 863
5-"Forceful Yoga," Hatha Yoga is a "system of physical and mental exercise developed in ancient times" that today are used to prepare the body and mind for meditation. Hatha Yoga is comprised of asanas (postures), dhauti or shodhana (cleansing practices), pranayama (breath control), bandha (energetic locks which temporarily restrict the flow prana) and mudra outer bodies." More esoterically, ha (sun) and tha (moon), signifying the masculine and feminine energy currents, or nadis, in the human body. (Dancing With Siva, p. 728-9)
6-Tree of Yoga, p. 3
7-Samadhi literally means 'placing, putting together.' (The Yoga Tradition, p.3). Samadhi is defined as "enstasy" ('standing within oneself.).' (Dancing With Siva, p. 805). This is most often seen translated as "absorption" or "ecstasy."
8-This would be Karma Yoga.
9-Feuerstein defines Brahman as "the transcendental ground of existence" or, according to Vedanta, "the Absolute." (The Yoga Tradition, p. 603)
10-Bhagavad Gita, p. 22
11-Going back as far as 2500 BCE, during the time of the Vedas, the earliest sacred literature of Hinduism, and preceeding even the Brahmanas, (The Yoga Tradition, p. 83)
12-Enstasy being to 'stand within oneself' and ecstasy being to 'stand outside of oneself. The Yoga Tradition, p. 4
13-"Transcedent: Surpassing the limits of experience or manifest form." (Dancing With Siva, p. 843)
14-Karma means "action" or "deed" and refers to not only any action or deed, but also to the "fruit of action" and to the law of cause and effect. (Dancing With Siva, p. 745-747)
15-According to Feuerstein, Kriya Yoga is the name Patanjali gives to the practice which combines tapas (purifying spiritual discipline), svadhyaya (study) and ishvara-pranidhana (devotion). (The Yoga Tradition, p. 605)
16-Laya means 'dissolution' as well as 'clinging.' Feuerstein says the "laya-yogins seek to meditatively dissolve themselves by clinging solely to the transcendental Self." (The Yoga Tradition, p. 71)
17-The Yoga Tradition, p. 505
18-Not to be confused with Swami Satchidananda's Integral Yoga (http://en.wikipedia.org/wiki/Integral_yoga)
19-The Yoga Tradition, p. 73-77
20-They come with names like Sivananda Yoga, Iyengar Yoga, Integral Yoga, Vinyasa Yoga, Ashtanga Yoga, Anasura Yoga, Bikram Yoga, etc. but all are physical practices centered around asana, pranayama, mantra, meditation and are all forms of the larger, general system of Hatha Yoga.
21-Not to be confused with the Hatha Yoga form called Ashtanga Vinyasa Yoga, formulated by Pattabhi Jois.
22-Dancing With Siva, p. 794-795
23-Later additions from other systems of yoga are daya (compassion), arjava (moral integrity), kshama (patience), dhriti (steadfastness), and mitahara (sparing diet). Dancing With Siva, p.862
24-I find it interesting to note that each of these yamas could be viewed today as a proper use and exchange of energy.
25-Perhaps the niyamas could be viewed today as the quality of energy, though this is sometimes attributed to dharma.
Newer Post Older Post Home