Impression: The Rime of the Ancient Mariner 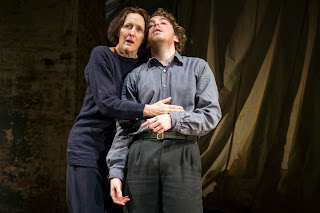 Reviewer's Notes:
It all started with rehearsals in director Phyllida Lloyd's kitchen. Fiona Shaw (who you may know as Aunt Petunia in the Harry Potter films, but she has done so much more!) and Lloyd were just thinking to present something relatively informally for their friends, they said at the Q&A following the performance I attended, as a way of bringing poetry to life through theatre. And while the costumes remain pretty ordinary (simple black t-shirts and trousers), it has long left the kitchen and the UK, to travel through Greece, the US and most recently Paris at Peter Brook's dream of a theatre, Theatre des Bouffes du Nord.

It was interesting to learn that the single dancer, in the form of Daniel Hay-Gordon, was originally a chorus of 6 male dancers. Only Danny, Shaw explained, could move through the physical images quick enough to keep pace with the rhythm of her text. Brought to life vividly by this team of artists, it will be long while yet before it returns to a quiet existence in the private domain of Phyllida Lloyd's kitchen.
--
am
Newer Post Older Post Home