Bory has created Plexus as a portrait of Kaori Ito, presented at the Theatre des Abbesses this month. To read Ann Moradian's IMPRESSION of the performance, please connect here to the Dance Enthusiast. 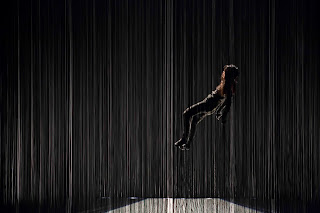 It was a pleasant surprise when Aurélian Bory joined Kaori Ito on stage for a bow at the end of Plexus. My husband, who began his career as an engineer, was as fascinated as I was by the set and lighting. I gathered up the courage to ask if we could meet him.

He explained the construction of the set with patience and what I believe was a quiet passion. He guided us onto the stage, explaining the set’s construction as we looked at it more closely: a single string, woven thousands of times between the two platforms with microphones planted beneath and on top of the platforms. The string is ordinary and the platforms disassemble into smaller squares. It is so simple it goes beyond elegant. It is a work of art in its own right and, between performances, would be better stored in a museum than in a warehouse.

Bory mentioned that he had begun his career in physics and architecture. Clearly he has never left either discipline, but only added on others. It helped me to understand why, even if I do not love all of his pieces equally, I have been so intrigued by his work over the years. There is an element of pure mind at work in space, testing the limits and exploring with an avid curiosity. 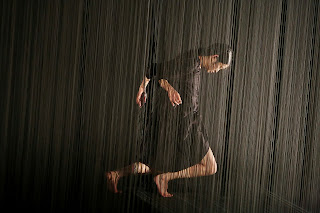 Lighting designer Arno Veyrat has worked with Company 111 since its beginning and his work is beyond brilliant in both Plexus and Sans objet, where the lighting brings relatively static materials to life, so that they are active participants in the dance.

When I told Ms. Ito that I had been keen to see her in Bory’s work because I had seen her perform in James Thiérrée’s Au revoir parapluie and, knowing what extraordinary feats she is capable of, was curious to see what they would come come up with together. They said it was actually their mutual friend James Thiérrée who had introduced them in 2009, when they first began discussing this work. It was well worth the wait, and a piece I would happily see again.