©Ann Moradian, for The Dance Enthusiast 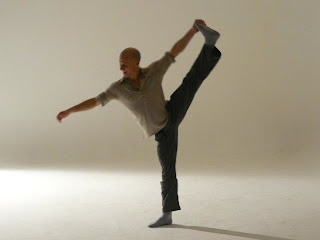 I was first introduced to Richard Siegal's work last fall in Paris at the Arts Arena. Siegal danced with William Forsythe's company up until about 7 years ago. His intent, he said, had always been to choreograph but his career as a dancer far surpassed his expectations. He "liked to be a muse to others," he said. He is currently the director of his own company, The Bakery, which is based in both Paris and Berlin.

The program I saw, If/Then Dialogues, took place at The Door Studios' intimate loft space near the Bastille. What I experienced could be described as a design in movement architecture that invited the audience to engage not only with Siegal, but also with each other through gesture and movement. By the end of the night, buoyed lightly with champagne, at least 80% of the audience shifted from verbal to physical 'conversation.' For me, the evening was a powerful affirmation of our humanity, our vulnerability and our interconnectedness. 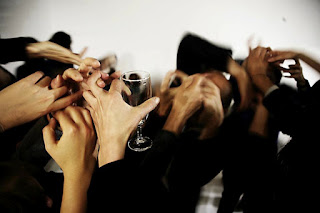 I was surprised to discover that a precise control system, which  Siegal calls his If/Then Methodology, served as the foundation for much of his choreographic work. The movement and gestural phrases are predefined. The choreographic score is written like a flowchart that meticulously notes the range of possibilities the dancers can choose from, and what possibilities remain open to them based on the choices they make. Essentially, "If I do x, then you do y (or z, or q)." The range of possibilities is very clearly outlined, demanding a mnemonic virtuosity on the part of the performers.

Map (or 'script') of the system for If/Then. Photo by Hillary Goidell. All rights reserved.

Control systems are, let's face it, about control. So, of course I wondered 'What happens if... someone breaks the rules?'

Siegal's response is "Yes, at what point does a system break down or implode? You can bore people,to the point that they stagnate. Or you can confront them, corner them, frustrate them... until there is an implosion and the realignment of an idea.” 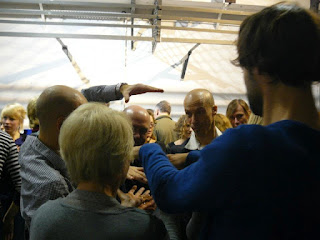 The first time he worked with his method in 2005, he found that he was too controlling. The dance, If/Then, was "an execution of the system" and it left little room for interpretive expression on the part of the dancers who were (at the time) Janis Brenner and Jeanine Durning. The frustration they felt served as feedback to the 'system.' The feedback pointed toward possibilities for improvement that were integrated later on.

"There is an interesting incompatibility" Siegal says. "Human nature and systems may at times seem to be in opposition." He thought the DVD he made in 2010, also called If/Then Dialogues, was a eulogy to that methodology and exploration. He thought that he was done with it. But something "uncoupled" during its use for the Venice Biennale of Architecture, and Siegal discovered that human nature and his system could co-exist although, Siegal still l points out, "It became important not to be a slave to the system." 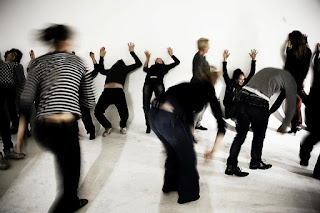 I wondered what had propelled Siegal, both consciously and unconsciously, to create his methodology.

His conscious intent was "to emancipate the dancer and contradictorily stake my claim as a choreographer. John Cage and Merce Cunningham imagined an art that eradicates the prejudices of the creator," and I participate in that desire," Siegal asserts, " But the relationship between dancer and choreographer is less clear-cut than it used to be. Choreographer and dancer, now, are often mutually responsible for the product. The If/Then methodology began as an attempt to resolve some of the inequities in this relationship."

Not only does Siegal aim to provoke a response from his dancers, he also wants provoke a response from the audience, as in performance art or action art. Certainly the program I saw at The Door Studios invited participation. Siegal's earlier solo Stranger was a one-on-one performance that he describes as a "kind of violence";  a confrontation with the role of the audience, and a demand that the audience  take responsibility for their part in the creation of their theatrical experience. "The response, " says Siegal, "whatever it is, is the thing I am looking for." 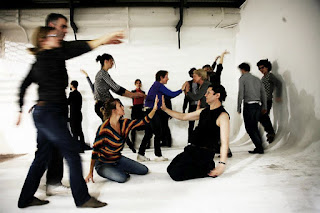