Richard Siegal, an American now based in Paris and Berlin, talks in Paris. Okay, he actually dances--long legged, loose-limbed power with articulation, and play-- and talks at the same time. And he even makes a lot of sense, despite the fact that he seems to be running off on tangents right and left, lost in his own stream of consciousness. 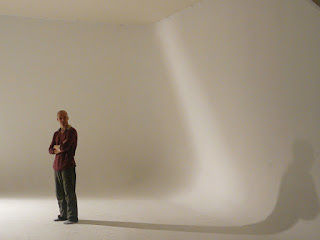 If/Then Dialogues is not a lecture-demonstration, nor a performance, nor a presentation. It really is a 'dialogue.' Okay, Siegal talks and moves the most in the first half of this informal presentation in the lower level loft space at the Door Studios. This is true. As he dances, moves, doesn't move, he is chatting with us all the while (“Is this music getting boring? Should I change it?”).

Siegal has made a series of what I think are very conscious choices, like: movement and words that seem casual, lights that keep the audience almost fully visible, sweats and tee-shirt for a costume, water when thirsty, chocolate to munch, sound system within reach. He gives us permission to be something other than “fine", a word he hears all the time in the States that isn't really fine at all. Added together, these choices create an environment that gives us permission to be honest and vulnerable, as Siegal is. (I mean, if we want to be). 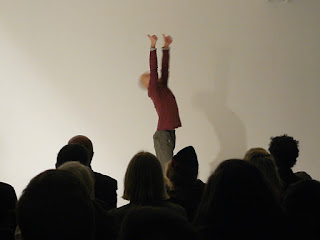 In his tangential stories (that are not really so tangential), I pick up on the bits that speak most to me: like 'we're all aging,' the body getting 'a little rickety' (Sigh). I am strangely reassured by his re-telling of Simon Forti's story of coming across a dead man lying on the sidewalk in front of a Paris bakery. As she tries to get information from the two policemen standing guard she meets their unyielding denial: "Rien à voir" (Nothing to see). Faced with a dead body on stage and the solid mass of unyielding police-flesh, 'aging' and 'a little rickety' start to seem pretty “fine” to me! 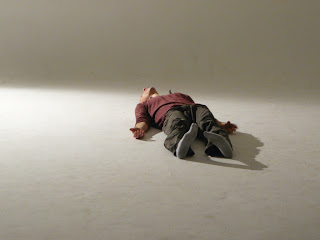 But can you believe he gave away the secrets of dance, and I missed it?! Eccentric contraction and concentric contraction did he say/show (shay?)? I must have blinked in the flurry of spitting movement. Rats! I'll have to ask him about that.

I hope this gives you a vague impression of the first half of the evening. It felt like a series of looping, sweeping, rolling non sequiturs, but... by the end of the evening it is clear that they were not all tangents. 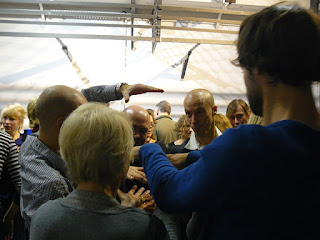 The second half begins with all of us shifting from the ground floor up a level. "Follow me..." to a second and equally charming space. A little champagne, “un petit goûter” (a little snack) and we, who were the audience, start to mess around a little, moving in (and out) of the totally white performance space--a studio usually occupied by upscale fashion photographers and their models.

Who would ever think you could get a very mixed group of usually reserved French people (well, to be fair, the Arts Arena has a very eclectic and international following) to, not only move together and improvise for hours, but to touch each other -- even touch each others leggings! (I send my apologies to the lady in the lamé.) 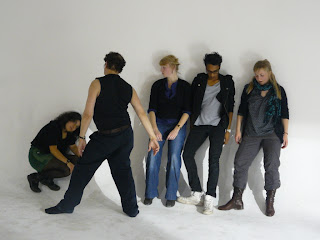 This is a Paris I've never experienced before outside of the Contact and 5-Rhythms dance communities. I was telling a couple of friends about it this morning and the French woman's jaw dropped open in disbelief. Unheard of here!

It just seemed to happen. In thinking back on it, it is clear that Siegal designed the evening specifically for this possibility, and that his casually sharing the definition of "Affordance" (the intention of the architect that is left behind through the parameters of the design itself) was anything but an irrelevant aside.

Looking at the design of the evening, Siegal first and foremost prepared us to be willing to move–to accept our limitations, and to forgive those quaint or outright bizarre expressions in movement that show up from time to time. (I mean, how could we not find Siegal's danced “sheep” – that looks nothing like any sheep we have ever seen – completely endearing? “That's supposed to be a sheep,” he tells us, about as surprised as we are!). 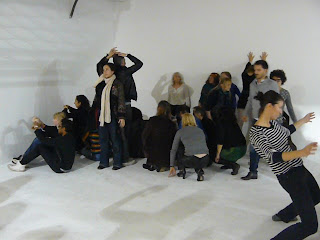 Of course, the champagne helped a bit, too. So while Siegal joined us to chat a bit (now in a black suit, like many of us), some of his dancers must have discreetly got a few willing souls moving. By the time I noticed anything interesting happening, there was a group moving in unison against the smooth curve of the wall that seemed to invite me, too, to touch. And to be willing to be touched too!

Thank you Richard, and Arts Arena, for such an extraordinary evening!