The Old Man with the Lamp

In the ancient Indian scriptures there are many stories worth recounting. One I especially love is about an Old Man with a Lamp. It goes something like this:

There was a man who, not so long ago, stepped out of his house into his garden at that magical time when light and shadow meet and merge, when night and day are for a moment one, and the air is quiet and full with its secrets. 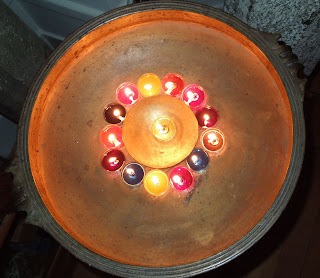 The man breathed in the moist air deeply, and widened his eyes to take in the beauty of the leaves and flowers and grass in his half lit garden. As he gazed across it all, his eyes came upon the coiled form of a snake. Now snakes come in all kinds, but in India it is often the deadly cobra that makes its home in such quiet gardens.

The man cried out in fear and panic "Snake! Snake!" trusting the night watchman to come with his pronged stick and thrust the poisonous creature into the fields or out into the river, far from the idyllic home he had worked so hard to build.

The old man came with his nightstick and his lamp and, as he moved closer to trap the snake's neck in the fork of his staff, the light revealed a coiled rope that must have been left out that night by the new gardener. The two men had a good laugh!

In another version, the old man has fallen asleep in his chair and his lamp has gone dim. The man pushes the old man aside as he rushes in to kill the snake. Only after he has exercised all his adrenalin destroying the thing does he realize it is only a rope. And it is only then as he turns, slightly abashed, toward the fallen elder that the man realizes the old man is dead beside him, his neck broken from the violence of the fall.

Swami Satchidananda says that this time of "twilight is the most dangerous time," because in the full light of day we can see clearly what is there, and in the dark of night we see nothing. But when the light and dark meet in that half-light of either dawn or dusk, it is then that we can confuse a misplaced rope and a deadly snake. He goes on to say that Yoga is neither for the enlightened nor for the ignorant, but for those in between, to dispel ignorance and to refine our discernment.