©Ann Moradian, from 'Impressions from Paris', for The Dance Enthusiast

I attended a performance of the Slovakian Ballet at the State Theatre in Bratislava 18 years ago. It was an unforgettable experience. The dance actually began as the conductor raised his baton. There was a very long pause in which you could savor and actually rest in the tangible silence that proceeds sound. The orchestra, the conductor and the audience together were suspended in that long moment, tasting the delicate birth of music. I will never hear music the same way again. And, after seeing Jaro Vinarksy's 'The Last Step Before' I will never see light in the same way again. 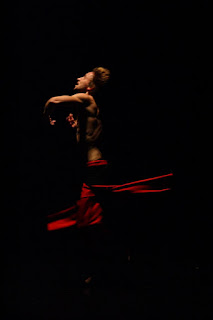 Jaro Vinarsky, in 'The Last Step Before', Photo© Noro Knapp

We are in the dark long enough for our eyes to adjust and register how deep it goes. When light comes, it comes slowly, floating red in space. It begins to register as body parts and their disappearance, like a slow motion strobe light. The images change from one space to another so sharply, and with such sculptural variation that it seems physically impossible.

As the light strengthens, the body parts merge into a single moving body that seems to float, suspended in the dark velvety space. It is only later, watching what looks like a glowing head bobbing on the surface of this black ocean, that I consciously recognize darkness as its own tangible entity.

Vinarsky is an incredible dancer. He unites breath, being, form and movement in a way that resonates as texture, vibration, memory, and feeling. I am moved deep within my being. But the brilliance of the collaboration between Vinarsky's choreography, Pavel Kotlik's lighting and Ondrej Bederka and Mirek Zitnik's costume cannot be ignored. It transforms the dance into an extraordinary visual and visceral experience.

The program notes tell us 'The Last Step Before' is "a story where one of many human beings attempts to fly." It refers to the character as "our hero" (I hate heroes! I even hate the “idea” of heroes.) To me, they imply a glamorization of struggle that I find self-aggrandizing and infantile -- blatantly false. But this hero is tenderly loved by his creator. This hero is so honest, sincere and vulnerable that he cuts through even my entrenched aversion. 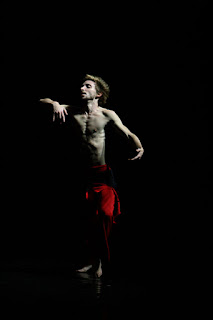 Jaro Vinarsky, In The Last Step Before, Photo© Noro Knapp

Maybe some of you had the opportunity to see Vinarsky in New York at La Mama last November, in 'The Painted Bird Bastard (Part 1)', but I had never heard of him before. I had, of course, heard of L'Etoile du Nord because it is one of the pulsing arteries of the dance community here in Paris, but this was the first chance I'd had to go there. It is a small black box with a deep and narrow stage where theater and dance are presented year-round. A photo exhibit, called corps révélé(s) – which I believe translates as 'revealed body(s) – is a joint project with Agence Révélateur. (The work of Claudia Vialaret, in particular, vibrates with movement.)

The second work on the program was by Eva Klimackova, another Slovakian, whose company, E7Ka, is based in Paris. I was curious to see her work because I had the pleasure of moving with her at a workshop that Bill Young conducted at Canaldanse here last spring. I will not forget the extraordinary sensitivity, depth and honesty I felt in her dancing. 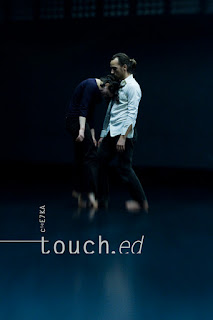 Klimackova's quartet, TOUCH.ED, was performed by Klimakova, Tomas Nepsinsky, Sylvain Rembert and Marika Rizzi. The dancers were costumed in blacks and blues that merged into the dark canvas of the theatre. The lighting by Alexandrine Daloiso and Philippe Deutsch seemed to flatten them further into the shadows. I recognize the choice of a casual performance aesthetic as a valid cultural expression, but was disappointed to feel so alienated from them. The audience, overall, was enthusiastic and responded warmly to Klimackova's piece.

Dark costumes against a dark backdrop with dark lighting didn't help me, with my failing eyesight and late night fatigue, to connect with the work. The dancers' casual energy came across to me as non-committal and without purpose. I didn't understand why I should care. Partnering that may feel strongly connected for the people doing it doesn't automatically transfer to performance. 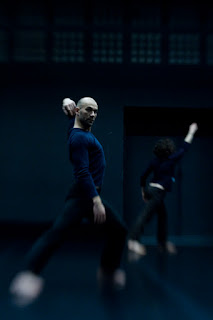 A French woman I spoke to on the metro ride home who had also seen the program described the dance as "delicate" and clearly appreciated it. I am glad the delicacy that I know is inherent in Klimackova's touch and in her partnering was communicated to others, though I am sorry it wasn't to me.