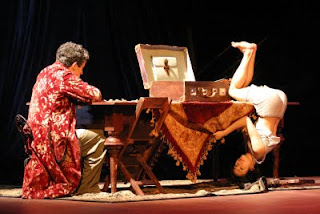 The first time I saw James Thiérrée's work a few years ago, I saw the production called "Bright Abyss," which left an unforgettable and thoroughly indescribable scent of a memory. I was and am still speechless. Not because of the performers' flying feats, which are truly impressive, but because of Thiérrée's ability as a director to measure, with elegance and precision, the balance between circus and physical poetry. It is a beautiful balance because it allows us to laugh and to be touched deeply, while setting the mind a-wander in an intangible realm that cannot be named or held. We cannot know what we have seen, we can only experience it. If we are lucky, it leaves a scent.

This season, I went to Thiérrée's production of "Au Revoir Parapluie" two times. I wasn't sure when I saw it the first time if Thiérrée had drifted off, out of his intangible universe into the realm of pure circus or not. I wanted to see if I had missed something. There are threads that bind a work together and give it coherence. Perhaps these threads are simply the trail left by the creator's mind at work in the material, his or her questions and intent. For me, as a viewer, these intangible threads matter. Where they are cut and abandoned, the work begins to fray, and our minds fray a bit along with them. 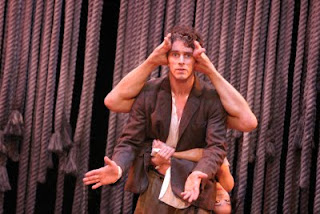 On first viewing, the array of effervescent vingnettes (each complete in itself and thoroughly satisfying) overwhelmed the overall work. I could only hold isolated bits in memory, and was left with no sense of the piece as a whole. I felt as if I had seen a great smattering of brilliant stars in the deep night sky, but was missing the one or two that would offer me the pleasure of believing I had discovered a constellation in their midst. I am glad I saw it again. In all of the rich and joyous phflash, twist and swish, the more subtle workings began to reveal themselves, exposing not only their threads, but also the beauty, mystery and tragedy of life, its chaos and contradictions, its returning themes, and momentary lunacies... its poetry.

Where I had feared Thiérrée had lost his Muse, I found instead that he was sharing her with us in the form of Maria Sendow who, like a metamorphing Virigil seems to guide Thiérrée's Dante-like character through the deep and buried layers of memory and mind. Her rich and powerful voice returned again and again, not only invoking her version of the story, but also bringing Thiérrée's character back to the thread he began with -- the story he silently sings us, in pure and accompanied mime, of his beloved and no longer present wife and child (or is it his dog?). We feel his yearning, his deep attachment, not to the actual beings they are, but to who he believes they were, how he believes they were, and what they meant to him. And can we ever really do better than that? Can we ever really know anyone, no matter how close or dear? Or do we really only ever know our perception of them? 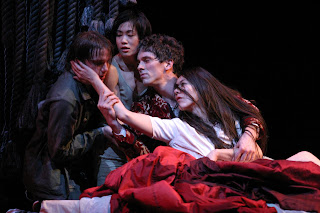 I can't write about the work without mentioning how delightful the use of music was throughout, despite what was often (and perhaps intentionally) poor quality recordings. When Sendow rises out of a great black sea of fabric she passes a precious ball of nothing into Thiérrée's carefully cupped hands. When opened, we hear his first quiet listening, like a child hearing the ocean in a conch shell that very first, most wondrous time. When eaten, we hear it buried deep within his belly. Thiérrée has carried the poignancy and humor of his grandfather, Charlie Chaplin, forward and into our times, challenging the edges of his art and uncovering new possibility.

The performers are all excellent. The two female dancers, Kaori Ito and Satchie Noro, are both strange and beautiful -- hybrid creatures -- equally accomplished as dancers and acrobats, as comfortable upside down and sideways as traveling across the floor. Magnus Jakobsson, dressed in what looked to me like a variation on army fatigues, is full of life, humor and commitment in every moment (and I suspect on every night).

In Jakobsson's mimed 'magic act,' you can't help but love his confusion whenever anything 'real' turns up. He is so satisfied with the imaginary world he is creating for us, and so disturbed when confronted by the tangible, like the actual cards in the 'card trick' that suddenly pop up, or the fake bird that plops heavily to the ground rather than flying gracefully off, or when he is overwhelmed by scarves that, in his mind, shouldn't really be there. Nor should the scissors be, which -- because they are -- pierce his heart and set it bleeding. This theme, we could call it something like 'the maze of the mind,' is reflected throughout the work in the form of the mistaken, the remembered, the wished for that imprints and overwrites the 'real' in our experience.

I love the fact that Thiérrée reuses his sets and props from work to work. The rocking chair from his piece 'Raoul' reappears to dance again with Thierrée in their graceful duet of loops and suspensions. The see-saw like frame ladder that rolls on giant wheels I am sure I first saw in "Bright Abyss." I know I've seen the grass and pond before too, though I don't recall which piece it was in... 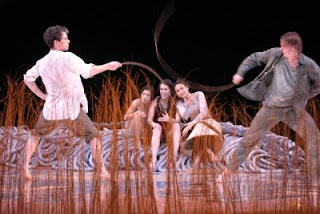 And on the subject of the grass -- tall dry stuff that swishes with the perfect sound of sabers as Thiérrée and Jakobsson duel -- I found myself lost here in the beauty of Thiérrée's 'juggling act' with one bundle of this grass. I found it the most beautiful moment of dance in the entire work. It is simply that. Juggling a single bunch of tall, dry, wheat colored grass. But done in such a way, becoming such pure expression of human movement, grace and feeling, that it becomes that thing that has no name and leaves its scent. It is done simply and sincerely and rings true in a way that imprints itself deeply in visceral memory.

The work is so rich and so full, and there is so much I am not telling you about -- like how dreamlike (and how lifelike because of that) the work is. Like how painfully touching it is when Thiérrée recognizes in what is now a very long-legged bird creature, the very articulate foot of his daughter/dog (Kaori Ito), and in recognizing her, finding her again. So much love and loss and separation, like getting caught up in a huge tangle of ropes and viscera. And how the heart, after all, is still beating. Somewhere... still beating. And the silly angel lady -- our Muse once again, strutting about in a huge white skirt that flips and thwacks with each step -- insisting on a game of badminton. The birdies, like stars, like snow falling... like dust falling. Like the dust on that magic ball of sound that came out of his head, that was gifted in the beginning, forgotten, and found again after being lost in the journey through his body, through his life... Like the dust of the tree that covers the stage before we ever began. That ball of dust blowing away. Too many birdies to juggle, thudding down until they pound on the head, like heavy hail. The work is a battered and battering thing. And frayed, like life. 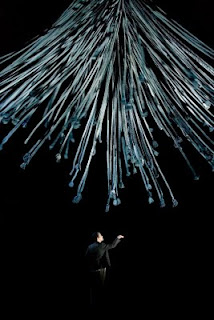 With costumes by Victoria Thiérrée and Manon Gignoux, lighting by Jérôme Sabre, sound by Thomas Delot, the stage by Marc Moura and Léon Bony, props and wardrobe by Lilliane Hérin and the directing assistance of Sidonie Pigeon, this team works together with the performers to create a magical world we can enter into and lose our way in, very much like Jakobsson and Thierrée lose their way with the very precise series of directions that are so complicated they cannot be repeated, despite how clear and obvious they were when given the first time! Quel voyage magique!
Newer Post Older Post Home