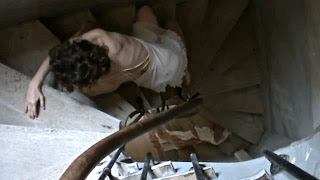 DOWNUP  is a visual poem querying perception from the tactile realm to the metaphysical.  Through the relentless and curious gaze of the camera, the viewer is drowned in a world that slides from up to down, from sharp-edged to filmy fabric, from struggle with the stairs that constrain the body to a playful engagement with this same forbidding construction.  Although it is tempting to see the woman as representative of contemporary female experience; of fighting to move forward when really she is trapped in an endless cycle of down/up, this piece contains much more than that kind of political response. The intimate connection between the camera and the surfaces, including the body at work and play on the stairs, drowns the viewer in images and movement, such that the body becomes something other than human,  the banister becomes an elevated perch against which the body strains for transcendence.

As skin and fabric slide and sinew around the wood, our attention is drawn to the nautilus nature of the twisting space: always circling down and in towards itself. The tints of violet and bleached blue create an air of dream space or endless afternoon; a moment lost in interminable movement, contained within endless spirals.

The woman becomes the movement—becomes the space that winds her up and down. There are glimpses of collapse, then ascension that enfolds and doubles back upon itself. The final image and the bizarre laughter of the moving woman leave a sense of shifted spaces and relations…absorbed by the light and the colors and material of body and stairs, we may have glimpsed something otherworldly…or the uncompromising view of the mad whose surface does not stop at skin but melds with the light and platforms surrounding: pressing against exteriority and wondering: ‘where do I exist?’