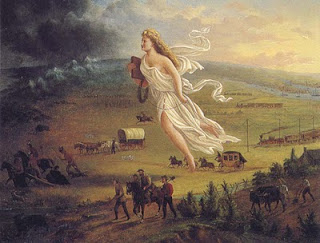 I was surprised the other day to discover that a friend of mine, who I regard as well-informed and highly educated, had never heard of the term Manifest Destiny, nor its relationship to the expansion of the United States, particularly in the 19th century. On refreshing my own memory and filling in some of the blanks, I could only marvel with sadness and regret at how ideas that begin as constructive can become destructive, sometimes without our even noticing that somewhere along the line we have crossed from idealistic and humane to monstrous.

What stories do we tell ourselves and our children? How do they reflect who we are and where we have come from, and how do they affect where we are headed?

The following information on Manifest Destiny comes from Wikipedia. It has been synthesized and pared-down with my own argument in view, of course!
_____________
Manifest Destiny was the 19th century American belief that the United States was destined to expand across the North American continent, from "sea to shining sea." The era of territorial expansion from the end of the War of 1812 to the beginning of the American Civil War in 1861 has been called the "Age of Manifest Destiny." In his 1935 study of the subject, Albert Weinberg wrote that "the expansionism of the [1830s] arose as a defensive effort to forestall the encroachment of Europe in North America." Historian William E. Weeks has noted that three key themes were usually touched upon by advocates of Manifest Destiny:

1. the virtue of the American people and their institutions;
2. the mission to spread these institutions, redeeming and remaking the world in the image of the U.S.; and
3. the destiny under God to accomplish this work.

But the foundational ideas underlying Manifest Destiny and American Exceptionalism were expressed much earlier. In Thomas Paine's Common Sense written in 1776, for example, he argues that the American Revolution provided an opportunity to create a new and better society. This echoes John Winthrop's 1630 sermon, "City upon a Hill," in which he called for the establishment of a virtuous community that would be a shining example to the Old World. While many Americans agreed with Paine, not all Americans believed that it ought to expand. Whigs especially argued that the "mission" of the United States was only to serve as a virtuous example to the rest of the world. If the United States was successful as a shining "city on a hill," people in other countries would seek to establish their own democratic republics. Thomas Jefferson did not initially believe it necessary that the United States grow in size, since he predicted that other, similar republics would be founded in North America, forming what he called an "empire for liberty." With the Louisiana Purchase in 1803, which doubled the size of the United States, Jefferson set the stage, however, for the continental expansion of the United States. Andrew Jackson described this expansion as "extending the area of freedom."

According to Reginald Stuart, "the compass of Manifest Destiny pointed west and southwest, not north, despite the use of the term 'continentalism'." In 1846 the Polk Administration moved to occupy a portion of Texas, which was also claimed by Mexico, which paved the way for the outbreak of the Mexican-American War. By the summer of 1847 there were calls for the annexation of "All Mexico," particularly among Eastern Democrats, who argued that bringing Mexico into the Union was the best way to ensure future peace in the region. This was a controversial proposition for two reasons:

"[W]e have never dreamt of incorporating into our Union any but the Caucasian race—the free white race. To incorporate Mexico, would be the very first instance of the kind, of incorporating an Indian race; for more than half of the Mexicans are Indians, and the other is composed chiefly of mixed tribes. I protest against such a union as that! Ours, sir, is the Government of a white race.... "

Manifest Destiny had "serious consequences" for Native Americans, since expansion implicitly meant the occupation and annexation of Native American land. The United States continued the European practice of recognizing only limited land rights of indigenous peoples. Through policy formulated by the Secretary of War, Henry Cox, the U.S. government sought to expand into the west through the legal purchase of Native American land in treaties. Indians were encouraged to sell their vast tribal lands and become "civilized", which meant (among other things) for Native American men to abandon hunting and become farmers, and for their society to reorganize around the family unit rather than the clan or tribe. The United States therefore acquired lands by treaty from Indian nations, usually under circumstances which suggest a lack of voluntary and knowing consent by the native signers. Advocates for these programs believed that the process of "settling" native tribes would greatly reduce the amount of land needed by the Native Americans, making more land available for homesteading by white Americans. According to Wikipedia, Thomas Jefferson believed that whites and Native Americans would merge to create a single nation, but came later to believe that the natives should emigrate across the Mississippi River and maintain a separate society, an idea made possible by the Louisiana Purchase.

This expression of the idea of Manifest Destiny came to be known, in this context, as Indian Removal. Although some humanitarian advocates of "removal" believed that American Indians would be better off moving away from whites, an increasing number of Americans regarded the natives as nothing more than savages who stood in the way of American expansion. One of America's first historians, Francis Parkman, wrote that Indians were "destined to MELT AND VANISH before the advancing waves of Anglo-American power, which now rolled westward unchecked and unopposed." [Emphasis mine.]

German geographer Friedrich Ratzel visited North America beginning in 1873 and saw the effects of American Manifest Destiny. Ratzel promoted overseas colonies for Germany in Asia and Africa, but not an expansion into Slavic lands. Later German publicists used this as an argument for the right of the German race to expand within Europe. This notion was later incorporated into Nazi ideology, as Lebensraum.
_____________

I believe we give it many different names, perhaps in the hope that we will not recognize it when we see it. For myself, I am continually astounded by the fact that my cultural heritage as an "American" -- which argues for equality, democracy and freedom -- is founded on the "removal," actually the genocide, of an entire people. I was explaining to my son the other day what we learn in history class is the story told by those who remain, but it is only one perspective on the story -- never objective or complete, not always fair or honest.

Ideology is a framework which can contain and direct our energies constructively, but can also just as easily make us blind to our humanity.
--
AM

Note on the image: American Progress by John Gast (circa 1872) - Columbia ('land of Columbus') leading "civilization" and its American settlers westward. She carries a school book, stringing telegraph wire as she advances, bringing not only light but also new forms of transportation. The Native Americans and wild animals flee into the darkness.
Posted by Ann Moradian at 10:51 AM No comments: Links to this post

I hadn't realized when I touched your hand,
or you touched mine, that I hold the hand of your mother,
the empty space your lover has left
embracing you like armor...
your cat's fur caressing my skin...
I hear a child crying and run with you
ahead of the rush of water
that mounts canyon walls...

What is this weaving when we meet,
when each of us carries already an entire universe? 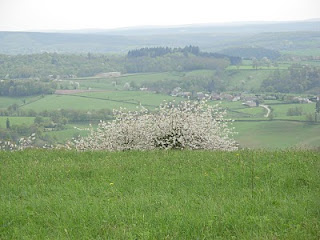 Written in response to "Reading the Body," an intensive weekend retreat journeying into literature through both the mind and body, conceived and conducted by Toby Brothers and Ann Moradian, and held in Bourgogne, France.
Posted by Ann Moradian at 2:54 PM No comments: Links to this post

Neuroscience of Empathy in Theatre

This blog entry of Anne Bogart's is interesting, if the neuroscience of empathy in theatre captures your imagination... (Click here to view) 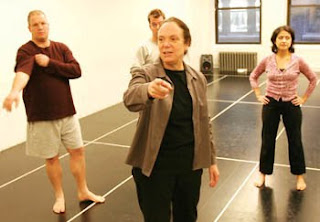